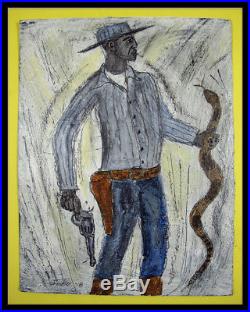 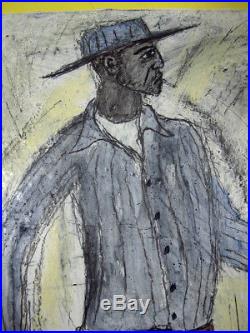 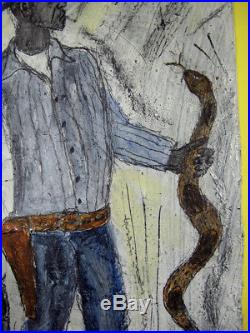 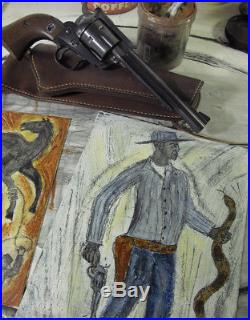 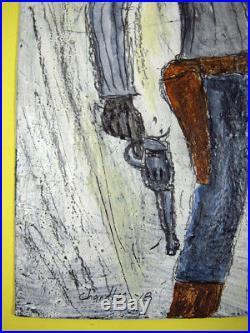 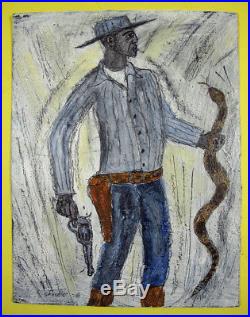 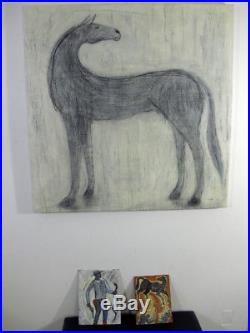 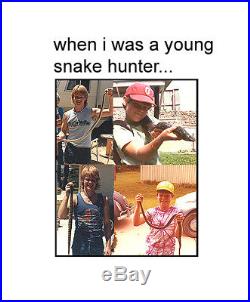 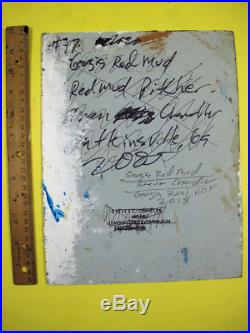 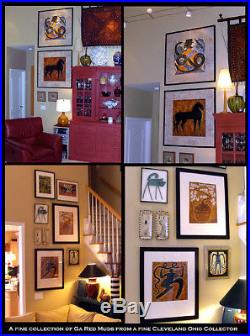 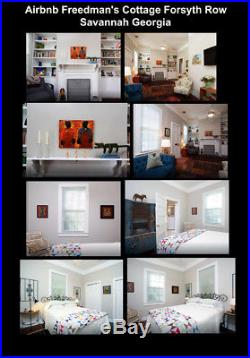 The framed image illustrates how it should be floated in a frame with a mat backing exposing all edges of the art. Original Art By Listed (Askart) Georgia Artist Steven Chandler. Signed: Chandler’18, also signed/ titled on back. Medium: Artist paint, Original Permanent Homemade Georgia Red Mud Paint on matboard. Size: 9 x 12 inches (roughly). Provenance: Painting will include an artist personalized receipt. I did this one this past summer, it was hot. I used my Dad’s old. 357 six shooter as a model for this one. I also like Jewish Folk Art, Russian , Mexican and well Folk Art made by many ethnicity’s and cultures. My figures are generally race free though, just because they might be dark, doesn’t mean anything to me other than a shade of light, shady figures, race-free.. I think there is a big difference between a racist conversation and a racial conversation. People used to message me before I started posting photos of myself, wondering what color I was. They never asked outright, but they beat around the bush, ridiculous.. One time somebody asked me if I was the “Real Steven Chandler” I told them I sure hope so, I’m wearing his underwear. To many, it seemed who I was, was more important than the image they were interested in. I have found over the years that many look at the artist before they look at the art. Do they look at the chef, before they eat the food? The author before reading the book? The director before the movie? I started catching snakes around six or seven years old. I read every book I could on them. I wanted to be a herpetologist. Sometime back then I went deaf for a while and drew pictures obsessively, nobody knew I was nearly deaf, they thought I was just not listening. Also back then if you drew obsessively, there must have been something wrong with you, so I couldn’t even be an artist, I had to get tested for autism and everything else. Because I couldn’t hear, I fell behind in math and other studies that you need to go into herpetology. Again, though, nobody knew I was nearly deaf, so I got yelled at for not listening and drawing all the time and running around chasing after rattlesnakes. Now days I would have been hailed as some child prodigy or something, but no, not in the 1970’s, back then you were just crazy. So I grew up making art and catching snakes. I went on to go to college and earned a degree in art. They told me in college I was primitive and could not teach me much, I already was there. So I get a degree, but was to primal for the hoity toity contemporary art world and too educated for the self-taught folk outsider whatever world-I just couldn’t win… The hell with them all, I made my own damn art world. This is my last painting of 2018. There is roughly 4000 of my works out there in the world now. I live in rural Georgia. Georgia Red Mud Painter Blog. The item “Rattlesnake Hunter Original Georgia Red Mud Modern Black Folk Outsider Pop Art” is in sale since Sunday, January 6, 2019. This item is in the category “Art\Paintings”. The seller is “georgia_red_mud_painter” and is located in Elberton, Georgia. This item can be shipped to United States, all countries in Europe, Canada, Japan.