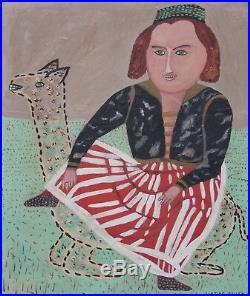 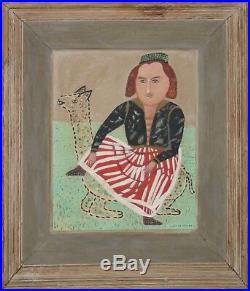 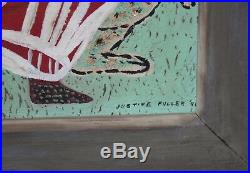 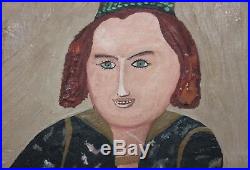 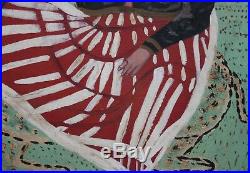 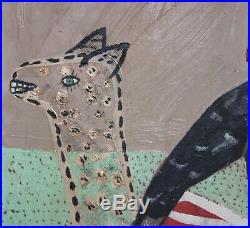 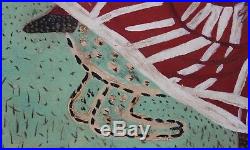 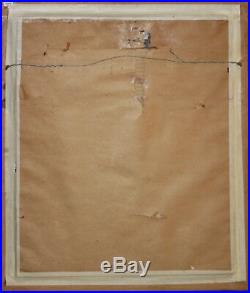 Dealsrus is well known for offering quality artwork at reasonable prices. Our reputation is stellar and we stand behind everything we sell. 20th Century New York Folk/Naive Artist best known for her. Naive townscapes, and Indian figures. Original signed oil paintng on canvas. Titled “Girl and Llama”. Signed and dated lower right– see photos. Canvas: 24″x 21″ Frame: 28″x 24.75″. Looks good, in “as found” original condition, craquelure, some chips of missing paint– please look at photos carefully. Fantastic composition by Justine Fuller depicting a whimsical portrait of a girl seated next to a pet llama. Fuller was best known for her Naive style paintings. This is a fine example of her work in good condition for its age. Justine Fuller was born in the Midwest to missionary parents who raised her in Bangkok, Thailand. Later, Justine moved back to the United States on her own. She received a Bachelor of Arts degree at a Midwest College around the Chicago region. Justine then received an art scholarship to the Cranbrook Academy of Art. She studied with Fredrich Taubes in New York and exhibited her work at the British Gallery in New York City. Justine traveled around the United States and then back to New York City. She resided in the Lower East Side of Manhattan on Madison Street. Justine married Marcel Lodice in 1960; later they moved to Florida and had a daughter. Justine moved back to New York to pursue her art career and left her husband and daughter in Florida. Miller also exhibited her artwork in his office for sale. Justine’s work was admired by people like Alexander Lieberman of. Who bought one of her paintings from Dr. Miller’s office and said she was a fine artist. Photographer Hans Namuth was a big admirer of hers and photographed her along with her works. Justine died of ovarian cancer in 1965. 100% Guaranteed to be as described. Ask all questions beforehand. All Sales are Final. All sales are final. We ask for your patience and assure you we are acting as quickly as we can. All lots are accompanied by a name and/or description and lot number for reference. An approximation can be provided beforehand if requested. Thank you for your cooperation in the matter. EastCoastArt (AKA dealsrus) warrants the authenticity and authorship of our merchandise. All lots are guaranteed to be as described. Prospective buyers are responsible for asking any and all questions about the merchandise, and to view all photos carefully, before purchasing. Should a dispute arise over the authenticity, it is our policy to have the purchaser obtain at their expense, an opinion (or two, in some cases and at our discretion) of recognized experts in the field, mutually acceptable by both EastCoastArt and the purchaser. We try to depict the merchandise and artwork as accurately as possible with photographs. We do not overly enhance the photos. However, every computer and monitor is different, and how we see the merchandise might differ from what you see. Please bear this in mind when viewing. Contact before purchasing for any questions you have. Unless otherwise specified, frames are considered a throw-in and are not guaranteed in any fashion. Sizes listed in the descriptions are a very close approximation, ie. If the painting is 12.2 x 14.2 we would describe such as a 12 x 14. The item “JUSTINE FULLER-NY Folk/Naive Arist-Original Signed Oil Painting-Girl and Llama” is in sale since Tuesday, January 9, 2018. This item is in the category “Art\Paintings”. The seller is “dealsrus” and is located in Pottstown, Pennsylvania. This item can be shipped worldwide.