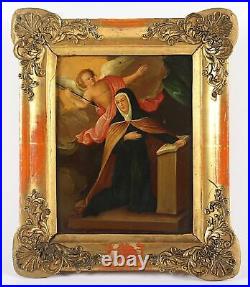 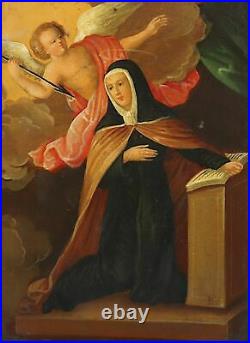 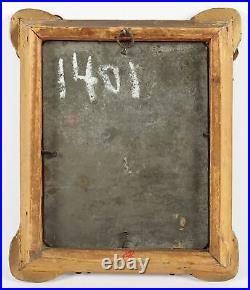 The painting, painted in oils on a copper plate, depicts the ecstasy of Saint Teresa of Avila as it is portrayed in her writings Life, Way for Perfection and Interior Mansions. The scene is captured at the moment before occurrence, the angel is holding the spear in his arm and drawing back in preparation to strike. This approach to a scene was made popular during the Baroque as can be experienced in Berninis monumental piece of the same subject, the influence of which is readily evident, dating the painting to second half of the 17th century at the earliest. It is painted in a Flemish Spanish style in bold saturated colors and almost naïve facial features common to Spanish and Flemish art of the period. Being one of the patron saints of Spain, Saint Teresa was a common subject in Spanish, and due to the close ties between Spain and The Netherlands in the 16-18 centuries this influence was passed on to Flemish art. Her most famous writing and hence her depiction in art is the ecstasy in which she describes the feeling of being united or made to understand the love of God through the piercing of her body by an angel wielding a spear. This almost erotic depiction of transcendent love and divine grace was cause for much anguish in the church and outrage at art depicting the ecstasy. Teresa was canonized in 1622 by pope Gregory XV, following which Berninis work was placed in Santa Maria Della Vittoria Church. Teresa was made the first female Doctor of the Church by pope Paul VI. 15 cms x 19 cms. At Soul Antiques & Sacred Art we take pride in our work by making detailed and accurate descriptions of every item. The item “St. Teresa & Angel, Painting Oil on Copper, Hispano-Flemish, 17th-18th century” is in sale since Saturday, October 30, 2021. This item is in the category “Art\Paintings”. The seller is “soulantiques” and is located in Saint-Gilles. This item can be shipped worldwide.