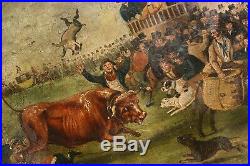 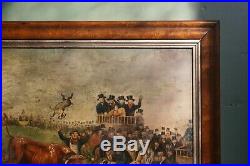 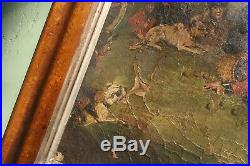 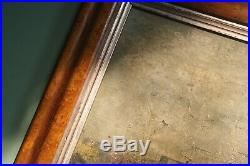 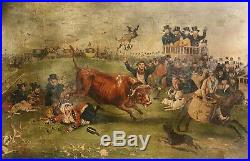 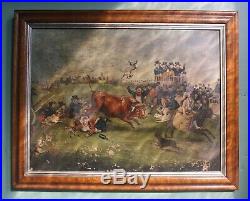 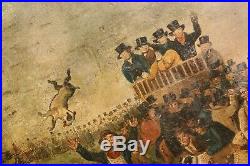 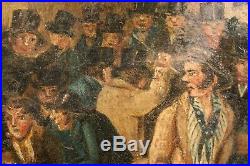 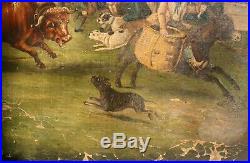 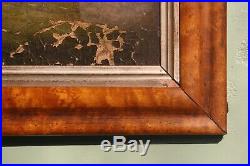 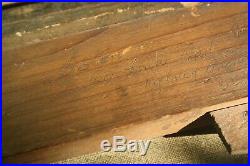 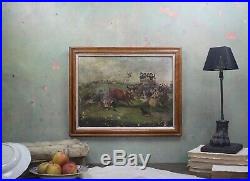 The School for Scandal. Follow Us on Instagram /theschoolforscandal/. A late 18th century oil on canvas depicting a bull baiting scene. In England during the time of Queen Anne, bull-baiting was practised in London at Hockley-in-the-Hole, twice a week and was also reasonably common in provincial towns. At Tutbury, a bull was tied to an iron stake so that it could move within a radius of about 30 feet. The object of the sport was for the dogs to immobilise the bull. Before the event started, the bull’s nose was blown full of pepper to enrage the animal before the baiting. The bull was often placed in a hole in the ground. A variant of bull-baiting was “pinning the bull”, where specially-trained dogs would set upon the bull one at a time, a successful attack resulting in the dog fastening his teeth strongly in the bull’s snout. The extinct Old English Bulldog was bred especially for this sport. Bull-baiting was not only practised as a form of recreation: there existed a “long-held belief” that baiting improved the flesh. By the early nineteenth century, the sport began to die out, both because the baiting caused a public nuisance and because of new concerns about animal cruelty. A Bill for the suppression of the practice was introduced into the House of Commons in 1802, but was defeated by thirteen votes. It was not finally outlawed until parliament passed the Cruelty to Animals Act of 1835, which forbade the keeping of any house, pit, or other place for baiting or fighting any bull, bear, dog, or other animal. This particular image was taken from a engraving “bull-baiting in Southwark” dated on August 4th, 1666. And then was documented in The new book of the dog : a comprehensive natural history of British dogs and their foreign relatives, with chapters on law, breeding, kennel management, and veterinary treatment by Robert Leighton 1911. The painting has been relined likely in the second quarter of the 19th century, and is in poor condition, flaking of paint in the bottom third some spots of water damage. But still has a charming appearance, a interesting and unusual subject matter. Later mounted in a veneered burr maple frame 48/61cm. Please get in contact as that can be arranged. If you wish to view any items that are currently for sale please feel free to arrange a day and time with myself. I would recommend viewing if you are able. Responsibility for the safety and security of the goods/items pass to the purchaser as soon as the goods/items are removed from our premises. Any disputes concerning carriage are therefore to be conducted by the purchaser with the carrier, and the vendor accepts no liability arising out of the appointment of such contractor. All items on this site are antiques and vintage pieces and are, by their very nature, imperfect. The cost of return is not refundable. Cancellation of orders must be made within 3 days. The item “Bull Broke Loose Bull Baiting Oil Canvas Folk Art Naive 18th Century Antique” is in sale since Saturday, April 6, 2019. This item is in the category “Art\Paintings”. The seller is “the-school-for-scandal” and is located in norfolk. This item can be shipped to United Kingdom, Austria, Belgium, Bulgaria, Croatia, Cyprus, Czech republic, Denmark, Estonia, Finland, France, Germany, Greece, Hungary, Ireland, Italy, Latvia, Lithuania, Luxembourg, Malta, Netherlands, Poland, Portugal, Romania, Slovakia, Slovenia, Spain, Sweden, Australia, United States, Canada, Brazil, Japan, New Zealand, China, Israel, Hong Kong, Norway, Indonesia, Malaysia, Mexico, Singapore, South Korea, Switzerland, Taiwan, Thailand, Bangladesh, Bermuda, Bolivia, Barbados, Brunei darussalam, Cayman islands, Ecuador, Egypt, Guernsey, Gibraltar, Guadeloupe, French guiana, Iceland, Jersey, Jordan, Cambodia, Liechtenstein, Sri lanka, Macao, Monaco, Maldives, Martinique, Nicaragua, Oman, Pakistan, Peru, Paraguay, Reunion, Saudi arabia, South africa, United arab emirates, Bahrain, Bahamas, Colombia, Jamaica, Kuwait, Panama, Qatar, Uruguay, Viet nam.