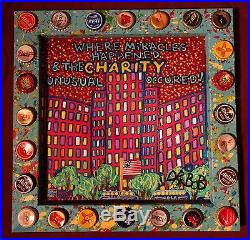 Charity Hospital, original painting by New Orleans Folk Artist Dr. The weird and wonderful New Orleans folk art of Dr. Bob was one of the brave 9th Ward souls who stayed behind for Hurricane Katrina. He battled looters and infection, but came out on top and is back in action. Please check the Dr. To view more works by the good doctor. We hope to be adding many more pieces in the coming weeks, so check back often. These paintings are not only great New Orleans memorabilia, but would make a great showpiece with a positive message in your bar, juke joint, or music venue. Description of this piece: Offered here is an original painting by Dr. Bob depicting New Orleans’ historic Charity Hospital. Charity Hospital flooded badly during Hurricane Katrina and has been closed ever since. The image strikingly depicts the hospital at night, under a black sky sparkling with multicolored stars. The windows of the hospital are ablaze with bright lights of many colors while an American flag waves in the entranceway. Above the hospital image Dr. Bob has painted the words: Charity: Where the Miracles Happened and the Unusual Occured. The hand-painted frame is adorned with bottle caps, some from local breweries. Bob has signed in the lower left corner. There is a heavy wire attached to the back for hanging. The dimensions (from the outer border of the frame) are approximately 13 x 13. The condition is excellent. Check It Out Department: Dr. Bob made the cover of New Orleans Magazine for June of 2008. Below is a picture of the artist, Dr. Bob, outside his New Orleans 9th Ward studio. In aftermath of Hurricane Katrina, Dr. Bob’s presence was apparent with various signs and messages he posted around the beleaguered Ninth Ward area of New Orleans. Below is a photo of an abandoned refrigerator, upon which Bob gives looters fair warning. Below is a photo of Mariah Carey posing with her own Dr. Bob piece, in her home. The photo appeared in People Magazine on January 13, 2003 (page 52). A Brief Bio of Dr. Bob, half Crow Indian and half French/German, is a self taught artist born in Kansas who relocated to New Orleans via Lake Pontchartrain. His utilization of found objects in his work, along with his own unique painting style, have combined into one of the most recognizable and respected representations of New Orleans and Louisiana folk art in the world. He popularized the phrase “Be Nice or Leave” in his paintings, which has become an internationally recognized part of his identity. Among the celebrities who have added Dr. Bob’s work to their private collections are Emmy Lou Harris, GiO The Burlesque Queen of New Orleans! , Oprah Winfrey, Mariah Carey Mariah actually posed with her Dr. Bob piece for People Magazine! , Billy Connolly, Isaac Tigrett, and The Reverend Howard Finster. Bob’s work can also be found in the permanent collections of the Smithsonian Institute, The Memphis Blues Foundation, the Center for Southern Folklore in Memphis, as well as the New Orleans House of Blues. Bob has also been featured on the Kansas City Public TV program, Rare Visions and Roadside Revelations Vol. 15 – Bumbling through the Bayou. Check out this groovy note to Louie from Dan Akroyd aka/ “Elwood Blues”. Your excellent customer service is a fine example of the graciousness and Southern hospitality for which New Orleans is famous.. Find out what prompted the Office of the Mayor of New Orleans to write this nice letter to Louie by visiting our About Me Page! Thank you for looking! Add Me to Your Favorite Sellers. The item “CHARITY HOSPITAL Classic New Orleans Louisiana Outsider Folk Art by DR. BOB” is in sale since Sunday, June 26, 2016. This item is in the category “Art\Folk Art & Indigenous Art”. The seller is “jukejointlouie” and is located in New Orleans, Louisiana. This item can be shipped worldwide.