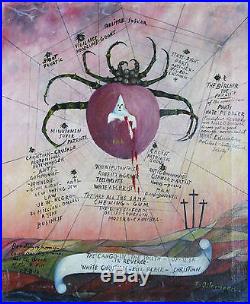 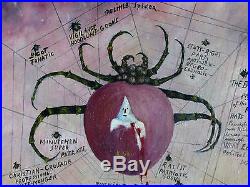 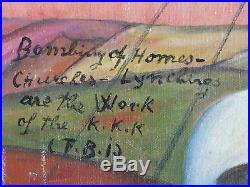 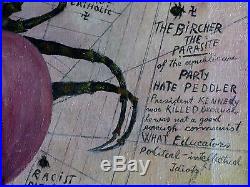 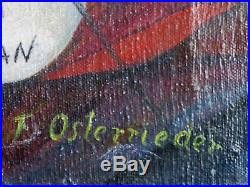 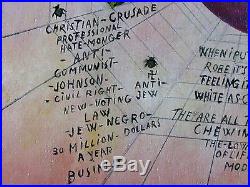 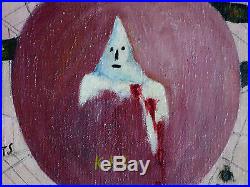 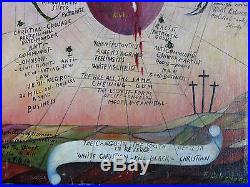 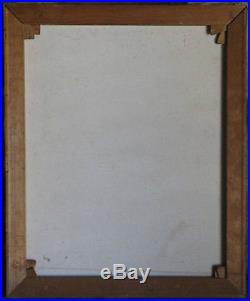 OUTSTANDING 1960s POLITICALNAÏVEFOLK ART PAINTINGSIGNED. A HISTORIC REPRESENTATIONAL CIVIL RIGHTS WORK OF ART. NAZIPARASITE REPUBLICAN PARTYJOHN F. WHITE CHRISTIAN KILL BLACK CHRISTIAN. BOMBING OF HOMESCHURCHESLYNCHINGS ARE WORK OF K. On offer is a remarkable, museum worthy, one-of-a-kind, historically significant, vintage naïve, folk art oil painting on canvas that tells a story of the Civil Rights Movement and the civil unrest of the 1960s. This is Americana at its best. The painting is an excellent example of representational art, and is deserving of preservation. This painting screams: Black Lives Matter, Segregation, Civil Rights, and the American South. The painting is titled The Little Spider and measures 24 x 20. The stretcher bar is stamped: Anco Bilt Glendale, NY. The overall condition of the painting is quite goodwith some abrading of the paint (see pics for more on condition). This circa 1963 work of art is a significant and outstanding period Civil Rights political declaration made by the artist and had to be created sometime after the assassination of John F. This is evidenced by the statement on the painting that reads. The Bircher The Parasite of the republican party HATE PEDDLER. President Kennedy was KILLED because he was not a good enough communist. When will you ever come across another folk-art painting like this with such strong representational and historical value? Likely never, except for the second painting by the same artist that will also be listed in the near future which features the crucifixion of an African American being crucified. The painting is signed F. Osterrieder and deserves further research. Although I cant be absolutely certain without further research, I believe the artist was Frank Osterrieder of Detroit, Michigan, which is exactly where these paintings were discovered. Census records reference Franks profession as Painter, [and I assume this means the painting trade]. However, it is clear that Frank had talentjust take a look at quality of the Spider. Franks wife, Rose, was self-employed as a professional Photographer and is listed in the Directory of Early Michigan Photographers. Both were born in Germany in 1894 and 1896, respectively, which would make Frank Osterreider in his 60s when he created his paintings. There is so much going on in this painting (see images posted below). Note the statement referring to the K. (Ku Klux Klan), which reads. WHEN I PUT ON THIS ROBE IT’S A GRAND FEELING IT’S WHITE AS CHRIST. Obviously, there are numerous spelling errors which add to the overall folky quality and naiveté of this work of art. The statement at the bottom of the painting reads. THE CANGO [Congo] IN THE SOUTH OF USA IN REVERCE [Reverse] WHITE CHRISTIAN KILL BLACK CHRISTIAN. The artist even references Fred Schwarz who was a political activist who founded the Christian Anti-Communism Crusade. Schwarz made a number of speaking tours in the USA in the 1950s, and in 1960 moved his base of operations to California. Note the statement by the artist. RACIST PATRIOTIC GOONS ANTI COMMUNIST CSWARZARTIST HOCUS-POCUS MAN GOOD BUSINESS. The item “RADICAL 1960s FOLK ART PAINTINGPOLITICALCIVIL RIGHTSSEGREGATIONLYNCHINGS” is in sale since Tuesday, February 09, 2016. This item is in the category “Art\Paintings”. The seller is “ghostsinhistory” and is located in Peoria, Arizona. This item can be shipped to United States.